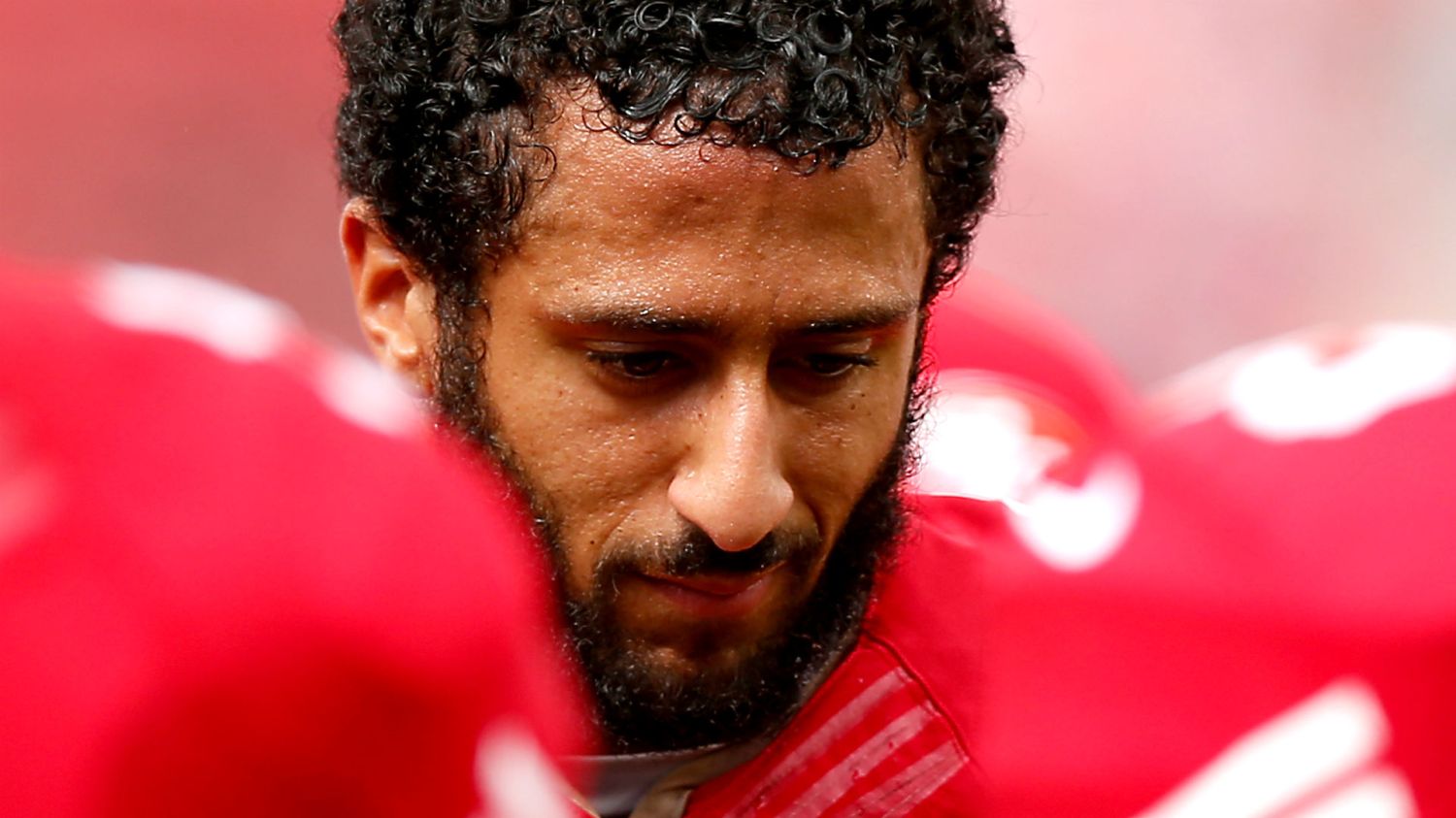 “I disapprove of what you say, but I will defend to the death your right to say it.”
– Evelyn Beatrice Hall, The Friends of Voltaire

By now, you’ve heard of Colin Kaepernick’s choice to protest the Star-Spangled Banner during an NFL preseason game by not standing up for it. Everyone and their auntie has chimed in on this “controversial” move on the part of Kaep. Predictably, many have come out of the woodwork to diminish and altogether dismiss the reason(s) that led to his choice. Countless people have taken it upon themselves to question what he did, rather than why he did it. His former coach, Jim Harbaugh, could not respect the motivation OR the action, folks. (Predictably, he has since “clarified” his comments.) Others have even been so kind as to help him make his point by hurling racial epithets and slurs his way. Naturally, Donald J. Drumpf had an oafish opinion on the matter. The man’s own momma, the very woman who put him up for adoption, came in with her hot take. (SPOILER ALERT: She’s not pleased.)

One of the more common counterarguments against Kaep’s protest is that his refusal to stand for the national anthem is somehow, someway disrespectful to the military. This point was made loud and clear by a former teammate of Kaep’s, Alex Boone of the Minnesota Vikings when he said, “…you should have some (expletive) respect for people who served, especially people that lost their life to protect our freedom.” This is some sort of a rallying cry surrounding Kaep’s protest, one that many have flocked to, because, after all, how dare someone disrespect the military and the brave men and women who put their lives on the line for America? Now, let me make this clear: we DEFINITELY should support our troops. Personally, I support them wholeheartedly. But to use the Armed Forces as a reason to dismiss Kaep’s argument – and thereby engaging in gargantuan levels of ignorance and irony by failing to realize that our soldiers fight to protect Kaep’s First Amendment right of free speech – is an insult to the military itself because that would render their sacrifices in vain.

Nevertheless, this has become the common refrain (pun intended) for why Kaep was wrong for protesting the way that he did. I’ll give you a few reasons why I think the whole “it’s disrespectful to the military” argument is a weak one:

It is absolutely critical that we do not miss this, friends, that “this country isn’t holding their end of the bargain up”. That’s a powerful indictment against this nation, i.e. the people. And he’s absolutely right in this instance, too. Think about how polarizing we are. Everyone is trying to be down with a click. You’re either liberal or conservative. You’re either pro-black or pro-police. You’re either iPhone or Android. It’s absolutely mind-boggling how we have contained ourselves to just one way of seeing the world, one way of digesting and processing information with little to no regard for dissent and diverging perspectives. Hell, we don’t even know how to treat our veterans the way we ought to, the very people who are out there fighting for us! How many of them come back to less than nothing? How many of them are now out on the streets, homeless and subject to drug addiction, and whatever mental illness they’ve developed from seeing and experiencing so much in service to this country? We don’t talk OR do enough for veterans when they come back, but we have no problem loading them into our self-righteous guns in order to shoot Kaep down? Show me the logic.

Now, I’ve made some references to the Constitution as it relates to this tale. Here’s the awful reality, though. The Constitution of the United States of America was written at a time when slavery was still happening, lest we forget. Slaves, black people, were not regarded as human beings, but relegated to a position that was sub-human. You’ve heard of the 3/5 clause, yes? That was constitutional. As I’ve often said, in order for all men to be equal, all men must first be men – and we were (undoubtedly still are, to some) only 3/5 of one. So there’s that. Now, if you wish to make the argument that Kaepernick is exercising rights in the Constitution that do not apply to him because he’s black, if that is at the core of your dissent for this man and his position, then just say that and be labeled a bigot and a nincompoop, and stop wasting everyone’s time.

Ultimately, friends, when Kaepernick elected to protest The Star-Spangled Banner, he wasn’t just shining the light on the oppression of people of color in this country, nor on police brutality, nor solely on an unjust justice system (which, by the way, will be releasing Brock Turner from jail after serving 3 months of a 6-month sentence for rape…). When Colin Kaepernick elected to protest the National Anthem on the United States of America, he shone a light on we, the people. He challenged each and every single national (i.e. person) to take a good, hard look in the mirror, to check our hearts, yes, even the depths of our very souls, and ask ourselves some difficult questions. And “We, the people…” simply cannot handle that… We’re just making his point.